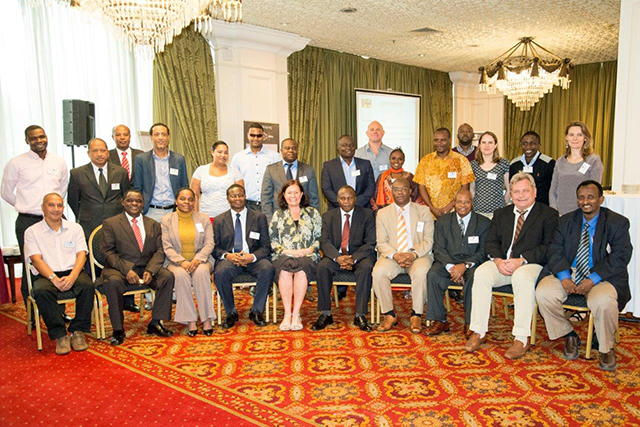 April 2015 - Sandy Davies (NFDS Technical Director) and Mark Ssemkula (Project Officer) were in Accra, Ghana for the initial meeting of the Norwegian Development Agency (Norad) funded 3 year project to support the Fisheries Intelligence and MCS support in West Africa initiative. The project brings together the six member countries of the Fisheries Committee of the West Central Gulf of Guinea (FCWC) in a new regional partnership to cooperate in fisheries management and particularly stopping illegal fishing.
The agreed next steps are to conduct regional training and develop national focus groups prior to the full launch of the Task Force at the Ministers meeting for the FCWC in December 2015.
The Coordination Team of the project comprises of the FCWC secretariat, Trygg Mat Tracking, Stop Illegal Fishing and NFDS.

The meeting bought together the FISH-i Africa member countries and for the first time the Task Force welcomed observers, both from the Western Indian Ocean region and from West Africa, where a similar regional Task Force is currently being established.

Task Force members were able to celebrate the success of the groups work to date, most notably through the apprehension of vessels fishing illegally, the discovery of forged licenses and the continued information sharing, all of which are playing a part in increasing compliance and stopping illegal fishing.